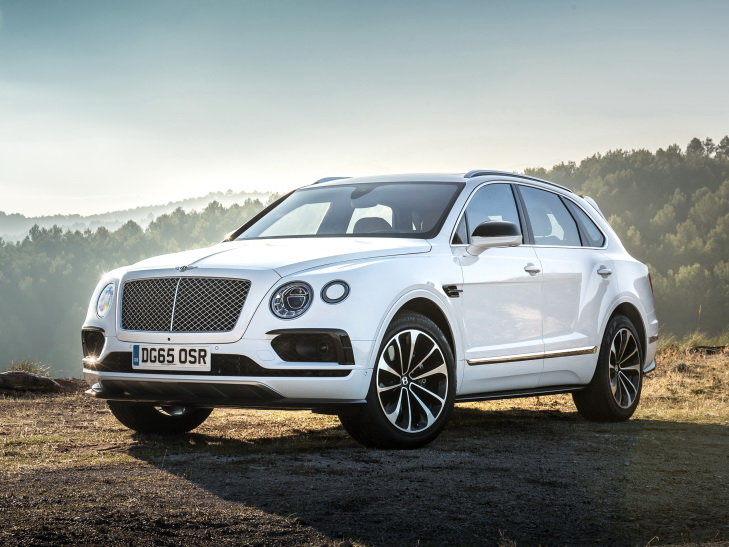 On September 9, 2015, Bentley unveiled its first Bentayga crossover, which is currently the fastest and most powerful SUV in the world.

Of the interesting design features of the twin-turbo W12, it is worth noting the possibility of turning off the cylinders (at low loads the engine runs on six “pots”), as well as the presence of two fuel injection systems (direct and distributed). The transmission is an eight-speed automatic, the drive is naturally full.

Due to the wide use of aluminum, it was possible to reduce weight by 236 kg (in comparison with the traditional body structure), and the voracity of ICE was reduced by 11.9%. Fuel consumption in the urban cycle of 19.2 liters, outside the city of 9.1.

Bentayga is equipped with a custom air suspension (there are four basic modes), active protection against overturning, electronic power steering with a variable gear ratio. Cruise control is adaptive, there are systems for recognition of road signs, assistance during descent and all-round visibility. Among the options are automatic valet, night vision system and projection display. In general, almost any “electronics” available today on the market.

Inside – leather, wood, metal (all neatly collected by English masters in the city of Crewe, Cheshire). Front ventilated seats are configured in 22 directions, equipped with heating and massager. If you choose a four-seater version of the crossover, the rear seats can be configured by 15 parameters. Buyers will be offered 15 basic shades of leather trim (you can always pay extra for an exclusive), 15 types of floor mats, seven wood options.

The head unit, of course, is not like the Tesla Model S, – the diagonal is only eight inches (the screen is touch-sensitive, there is a 60 GB hard drive). The rear passengers were lucky a little more: 10.2-inch tablets with an Android-based operating system are located on the head restraints. As for music, there are three options to choose from.

Bentley plans to release a seven-seat modification, a more powerful sports version, versions with a diesel engine and hybrid powerplant.

The larger the engine, the more powerful the car, and, as a rule, it is more. It makes no sense to put a small-engined motor on a large car, the engine simply cannot cope with its mass, and the opposite is also meaningless – to put a large motor on a light car. Therefore, manufacturers are trying to pick up the motor … to the price of the car. The more expensive and prestigious model, the greater the volume of the engine on it and the more powerful it is. Budget versions rarely boast a cubic capacity of more than two liters.