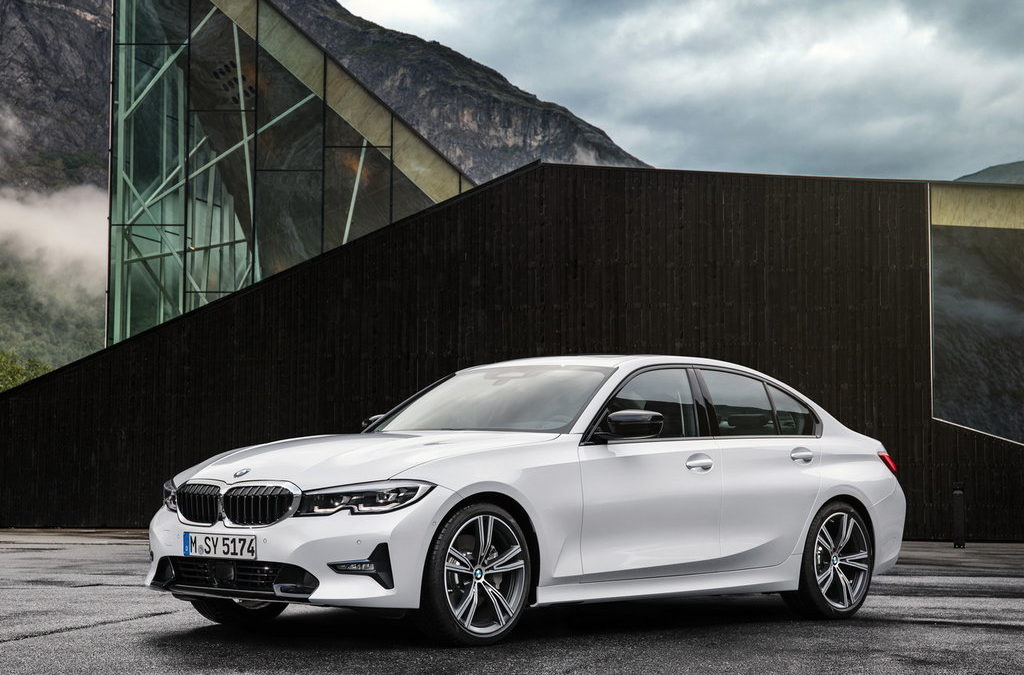 It’s no joke: the length of the new 3 series is comparable to the 5 series E34 of the 1987 model, and its width and wheelbase far exceeds it. Despite the increase in size, the G20 is lighter than its predecessor – the design optimization and the use of lightweight materials made it possible to reduce the curb weight in all models by an average of 55 kg. In the new generation of the BMW 3 series, the proportions characteristic of the model are preserved, the distinguishing features of which are the short front overhang and the cabin shifted back. But in terms of shaping the body has become completely different – plastic surfaces more elaborate and complex.

An interesting detail – on the G20, BMW designers re-branded the windows configuration, known as the “Hofmeister bend.” A small corner now appeared in the rear window ending, and the rounding piping is now attached to the rear rack, and not to the door. The body is carefully designed from the point of view of streamlining – the drag coefficient is only 0.23 (this is very little). The salon is executed in a new iteration of the BMW corporate style: the design of the familiar architecture with the center console slightly turned towards the driver is now a “techno” style.

In the base BMW 3 series G20 is equipped with a 5.7-inch display of digital instrument cluster and an 8.8-inch touch screen multimedia system. More expensive versions will come with a 12.3-inch combination and a 10.25-inch multimedia screen. Information that the version with the “automatic” will not have a traditional selector, was not confirmed: on the center console 3 series with automatic transmission, you can see the usual “switch” transmission modes.

At the start of sales for the new 3 Series declared five engines. The 320i and 330i are equipped with four-cylinder petrol engines and develop 184 hp. and 258 hp respectively. Diesel four-cylinder power units produce 150 hp. in the 318d and 190 hp at 320d. The 330d is equipped with a 265 hp six-cylinder in-line diesel engine. In addition to the rear-wheel drive version, an all-wheel-drive version of the 320d xDrive will also be offered at the initial stage. Three new versions will be available – 330i, 320d and 320d xDrive.

For us, all versions will default to the M Sport package, which will be offered as an option for other markets. M Sport includes aggressive-style bumpers, sports suspension and brakes, a three-spoke leather steering wheel and LED fog lights. For the 330i, an advanced differential M Sport will be offered as an option. All BMW 3 series of the new generation are equipped with progressive type shock absorbers. Their rigidity is constantly adjusted to fit the springs, which reduces the buildup of the body when driving irregularities or sharp turns.

Another of the important: it is argued that the car’s interior has become more spacious compared to the predecessor model. There is more space in the legs and shoulders of the front riders. Trunk volume has grown by 20 liters and now reaches 480 liters. The back of the rear seat “cut” into three parts in the proportion of 40:20:40. An optionally available electric tailgate and hitch for the trailer, which extends and folds automatically. In the vehicle configuration declared active cruise control, monitoring “blind spots” on the sides and rear, help system when leaving the parking in reverse. The projection display has an increased diagonal and improved graphics and can display “more diverse content.” As an option, a parking assistant is available that can automatically move along a previously traveled path at a distance of up to 50 meters. The novelty will be produced at the BMW plant in Munich, as well as at the joint venture of BMW and Brilliance Auto in Shenyang (China) and the new plant of the concern in San Luis Potosi, Mexico.