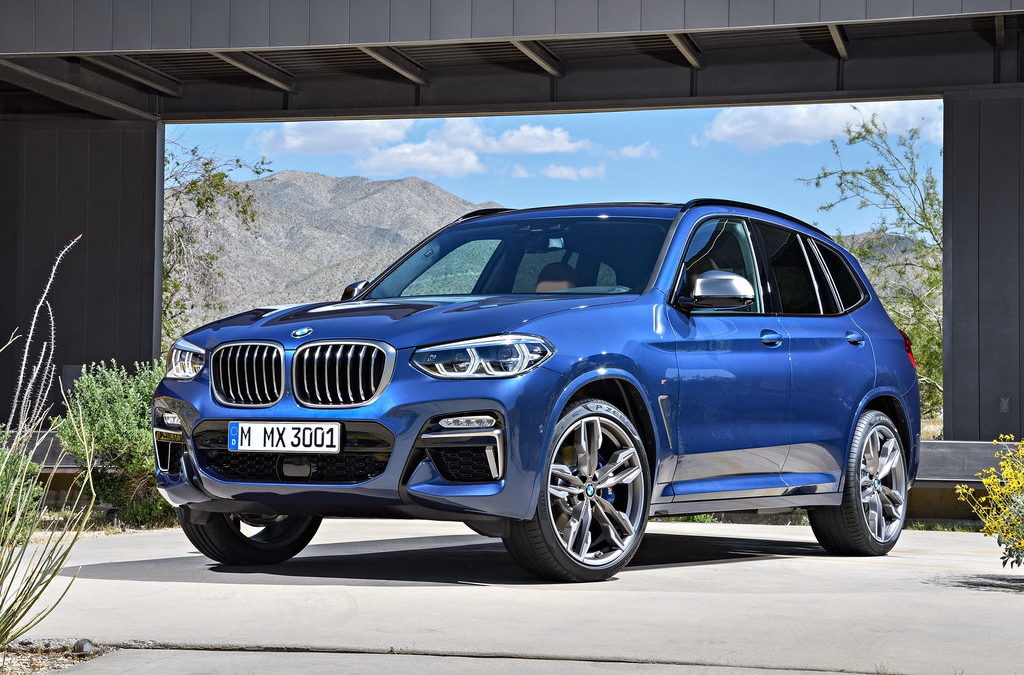 The official presentation of the third generation of the compact crossover BMW X3 (G01) was held in June 2017 in the United States at the BMW plant in Spartanburg (South Carolina). It is worth recalling that since the second generation, the production of the model was established in the States, with a large eye on the American market, where SUVs are in high demand. The exterior and interior of the new generation X3 BMW X model is executed in the last iteration of the BMW corporate identity.

Compared with its predecessor, the new “X-third” has increased in size, light aluminum-based alloys are more widely used in the design, which has significantly saved in weight (minus 55 kg compared with the previous model). In addition, the engineers managed to achieve weight distribution on the axes in the proportion of 50/50 – this has a beneficial effect on the handling and stability. The crossover got a modernized all-wheel drive system xDrive, which is now integrated with the system of exchange rate stability. The third generation of BMW X3, as usual, is offered in a wide variety of modifications. As expected, in addition to the traditional gasoline and diesel engines, the third generation BMW X3 will also receive a hybrid installation.

Regardless of the performance, all cars in the BMW X3 (G01) line for the Russian market have the following set of functions. These include Auto Start / Stop and braking energy recovery, advanced LED headlights and LED fog lights, 18-inch light-alloy wheels, heated front seats, multifunction steering wheel, front and rear armrests, automatic tailgate drive, second row of seats, folding in proportion 40/20/40. The standard audio system has 6 speakers, a Hands-free device with a USB input, with a multimedia system with an iDrive controller and a 6.5 ”display and single-zone climate control in the initial trim levels, and a control display with a diagonal of 10 is available for more expensive new trim levels , 25 inches, 3-zone climate control, ventilated front seats and a panoramic glass roof. In the M40i, the car is distinguished not only by the sports chassis, but also by the aerodynamic package M, 20-inch light-alloy wheels with different sized tires, sports seats and steering wheel, as well as other sports parts.

The BMW X3 Series G01 crossover is built on a CLAR platform with a double-hinged front suspension with anti-roll bars and a five-link rear suspension. The length, width, height of the new X3 are 4708, 1891 and 1676 mm respectively, that is, it is 53 mm longer, 10 mm wider and 15 mm higher than the model of the outgoing sample. The wheelbase of the novelty is measured at 2864 mm (+54 mm). The model is built on the concept of BMW Efficient Lightweight, which involves the use of high-tech lightweight materials (aluminum and carbon) to minimize vehicle weight and improve dynamics. The heaviest version of the X3 xDrive30d has a dry weight of 1895 kg, and the initial xDrive20i – 1715 kg. The amount of luggage varies from 550 to 1600 liters. The rear seats of the car are built on the principle of “through loading” – parts of the backs are folded in the proportion of 40:20:40.

As already noted, the next “X-third” is equipped with a modernized all-wheel drive system xDrive, which is now combined with a system of exchange rate stability. This allows you to redistribute the torque between all four wheels in such a way as to ensure the best grip even on slippery surfaces. Continuing the topic of safety, be sure to note the presence in the list of standard equipment of rain sensors, including automatic switching on headlights, heated windshield washer nozzles, front and rear parking sensors, front and side airbags for the driver and front passenger, and inflatable curtains for the first and second row seats. An integral part of the “Driving Assistant Plus” supplementary package is the Steering and Rebuilding Assistant, including the traffic assistant in traffic jams.