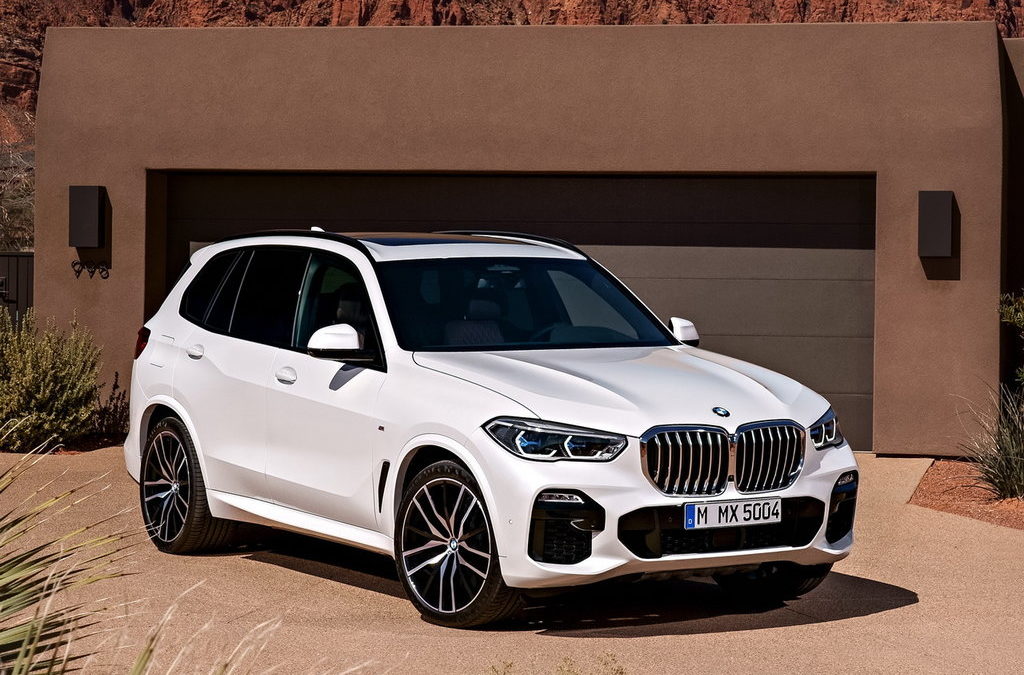 From the point of view of design, the fourth-generation BMW X5 model has remained faithful to the style of previous generations, but the forms in the exterior are slightly rougher and more courageous. Branded “nostrils” on the new X5 have become more massive, now they are visually combined with a chrome-plated jumper. The car is equipped with LED headlights, and laser-luminescent optics are offered for an extra charge.

The new generation has received an internal G05 index and is built on the same BMW CLAR (Cluster Architecture) platform as the G30 (5 Series) and G11 (7 Series) models. Relative to the previous generation, the crossover became 36 mm longer, 66 mm wider and 19 mm higher, the wheelbase is increased by 42 mm. The main place of production is still a plant in Spartanburg, USA. In Russia, at the start of sales for the new X5, four engines were offered: two petrol (340 and 462 hp) and two diesel (249 and 400 hp). All engines are combined by default with an 8-speed automatic transmission and all-wheel drive system.

In the cabin, the new X5 is BMW’s traditional front-panel architecture, which is driver-oriented. The crossover has a digital instrument cluster and a 12.3-inch display of a multimedia system that can recognize gestures and voice commands. The graphics of the virtual “tidy” varies depending on the chassis settings. Interesting options include four-zone climate control, a Bowers & Wilkins audio system, a 30% more panoramic panoramic roof, and an entertainment system for rear passengers with a 10.2-inch display and a Blu-Ray player. The gearshift switch, the start button and the multimedia system control washer can be trimmed with Swarovski crystal. For the car offered sports or comfortable front seats with ventilation, heating and massage. Cup holders have heating and cooling functions.

The front suspension of the fourth-generation BMW X5 is independent, with double wishbones. Rear – independent, multi-link. The basic equipment of the model includes the Dynamic Damper Control shock absorber dynamic adjustment system. For a surcharge, you can order the rear limited slip differential and air suspension with an 80 mm ground clearance, and for ease of loading / unloading the car can “squat” by 40 mm, while pneumatic supports are installed on both axles. Also available off-road package, including the protection of the bottom and the aforementioned limited slip differential. Even in this package, there is a special suspension configuration with the modes “Gravel”, “Rocks”, “Sand” and “Snow”. The length, width, height of the crossover are 4922, 2004 and 1781 mm, respectively. The wheelbase is measured 2975 mm. Turning circle – 12.6 m. The volume of the trunk in the normal state – 645 liters, with the rear seats folded, it increases to 1860 liters. As an option, a third row of seats is offered. Both parts of the tailgate (upper and lower sections) are opened and closed by means of an electric drive – with a comfortable access system, enough movement with a foot under the rear bumper. For ease of loading, the curtain is retractable with an electric drive in a special compartment under the boot floor.

The BMW X5 (G05) is equipped with the most advanced security systems: all-round cameras, short-range and long-range radars, ultrasonic parking sensors; assistance systems include adaptive cruise control, lane assist, car driver, traffic jam assistant. The autopilot of the second level is able to move independently along its own lane at a speed of up to 60 km / h, stop completely and get under way in the stream. The assistant of backward movement remembers the last 50 meters of the track and is able to repeat the trajectory in reverse order. The projection display of the new generation provides even more detailed graphic information. Here is a complete set of airbags (including a knee for the driver), inflatable seat belts, rain and light sensors, optional laser-luminescent optics with high beam, “Hit” at 500 meters, and so on. In the Euro NCAP test, the crossover received 5 stars.

BMW X5 – one of the most successful models of the company. The Russian market is no exception. Traditionally, the BMW X5 assembly is localized at the Avtotor plant in Kaliningrad. The model has a huge army of loyal fans who need to appreciate the new design and all the technical complexity of the new machine, and in terms of digital saturation the fourth-generation model is one of the favorites in the class. The company also expects that the new X5 will further strengthen its position in the premium segment. At the same time, compared with previous generations, not only the price has increased, but also the requirements for quality of service.