The Exhaust Pipe Smokes and Smells Bad: How to Interpret the Colors of the Exhaust Smoke Correctly! 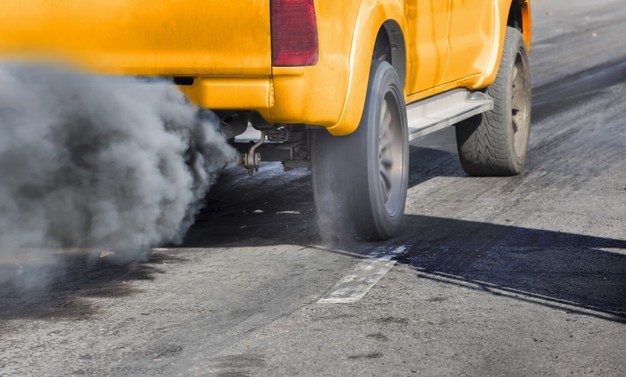 It is quite normal for the exhaust pipe of a car to smoke since combustion engines generate exhaust gases that have to go somewhere. You can usually barely see what’s coming out of the tailpipe. However, if you have colorations, you should take a closer look. They could indicate an early engine failure. In this article we will explain what aspects of exhaust smoke you should look for.

Function of a combustion engine

All types of combustion engines work on the same principle: fuel burns under high pressure causing an explosion that drives a piston. The engine mechanics absorb this movement and transmit it to the drive section, regardless of whether it is a four-stroke gasoline engine, two-stroke, a diesel engine or a rotary engine. This basic operating principle does not change.

What can get into the combustion chamber?

In four-stroke gasoline and diesel engines, only the fuel-air mixture enters the combustion chamber. This is burned and is then directed to the exhaust gas cleaning. In two-stroke engines, which can be found in mopeds, chainsaws or lawn mowers, oil always penetrates the combustion chamber as well. For this reason, motorcycles always have a trail of blue smoke behind them, which cannot be avoided by construction.
Large diesel boats also have a two-stroke engine, however, these do not play any role in road traffic. The old fighter jets even had water injections. The sudden evaporation of water was supposed to increase power in the short term, which in this case also worked. However, this technology was never used in car engines.

A clear to whitish gray color is normal, but if the gases become increasingly visible you should be alarmed. The most typical colorations of the exhaust gases are:

White smoke from the exhaust pipe due to moisture

White exhaust fumes are always an indication of high humidity. However, before you panic, you should take a closer look. Large, white smoke and vapor lines appear in winter in any car. If the vehicle has been parked hot and it has spent several hours in the cold, it is a natural reaction in which when the exhaust pipe cools, condensed water accumulates from the ambient air. This is completely normal. As one liter of water generates 1,650 liters of white steam, this is a normal characteristic of cold start. Just a few centiliters of water are enough to generate a large amount of steam. But the white vapor tends to disappear quickly as hot exhaust gases quickly dry out the system again.

This can be clearly detected as follows:

1. Turn off the engine
2. Check the water hose pressure
3. Allow the engine to cool
4. Carefully open the cover of the expansion tank or the cooler
5. Add coolant
6. Keep the engine running with the tank expansion or open cooler
7. Check water behavior

A hot engine always has a risk of burns. Therefore, a hot engine should never be handled. When the engine is turned off, the larger hose of the cooling system is squeezed slightly. If a clear resistance is now felt, then there is very likely pressure in the coolant. The pressure has to be reduced first, so the engine is allowed to cool. The caps can be opened in two steps. A quarter turn already allows to reduce the excess pressure. As soon as the cap no longer hisses or bubbles, it can be removed completely.

When enough coolant has been added, the engine is allowed to run again. Next, take a look at the expansion tank or refrigerator. If bubbles now form, the head gasket is defective. In this case it can only be changed.

Black from a mix error

Black smoke from the tailpipe indicates excessively fatty combustion. The mixture is no longer capable of burning gasoline or diesel completely and some of the hydrocarbons are “charred” and expelled as soot. In this case the cause is usually an electronic defect. The lambda probe is a common cause such as a spark ignition defective. The ignition system may also be out of adjustment. In any case, a professional workshop should be consulted. If the smoke is black, the repair will most likely be inexpensive.

Blue smoke from the exhaust pipe clearly indicates that oil is reaching the combustion chamber.
This can have many causes, which are very difficult to limit.

The most commons are:

If too much oil has been added, increase the pressure in the oil system. In this case the oil overflows the piston and enters the combustion chamber. There it burns generating that characteristic blue color. The first step to follow, when blue smoke is detected, is therefore to check the oil level. If this exceeds the maximum, then the cause has been found. An oil change according to the manufacturer’s directions can help.

An overdose is often due to a wrong interpretation of the oil level. When a car has warmed up, the motor oilit has been distributed throughout the engine. The oil dipstick, however, is calibrated in such a way that it only gives accurate information when the engine is cold. If the oil level is checked immediately after parking the car, it may appear that there is not enough oil in the engine. Therefore, always wait 3-5 minutes after parking the vehicle to check the oil level.

The compression rings seal the pistons to the cylinder wall. If these are damaged, the oil can penetrate into the combustion chamber. There it burns generating that characteristic blue color. Defective compression segments are detected through a compression test that can be carried out in any professional workshop at a very economical price. For this, a test device is screwed onto the thread of the spark plug and the engine is left running. The internal pressure of the cylinder provides information on the condition of the compression rings, which are costly to repair because the entire engine has to be disassembled.

If the compression and oil level are in good condition, the next likely cause of blue smoke is a deteriorated head gasket. Also here it counts that an opening between the combustion chamber and the oil system acts in both directions. A sign indicating a bad head gasket is located under the oil plug. If there is brown and white foam there, then the cylinder head gasket is clearly faulty. Also, the cooling water may have turned black and brown from seepage of oil.

If the oil level, compression, and head gasket are okay, then only the valve stem gaskets remain as the only possible cause. These are annular and seal the valves to prevent lubricating oil from entering the combustion chamber.