We make it simple for you to find used Cummins engines for sale from junk yards across the the US, allowing you to get your truck back on the road! Complete the form and allow the relevant scrap yards and engine supplier to contact you with a price.

Cummins Inc. is an American manufacturer of diesel and gas engines, headquartered in Columbus in the US state of Indiana. The company’s shares are traded on the New York Stock Exchange. Cummins generates more than half of its sales outside of the United States.

Cummins is named after the inventor Clessie Cummins , who played a key role in founding the company. He was financially supported by William Irwin from 1919 when he began to improve the design of existing diesel engines.

Duesenberg-Cummins Diesel Special (1934)
To highlight the benefits of the diesel engine, Cummins built some Duesenberg racing cars for the 500 miles from Indianapolis between 1929 and 1934 . Dave Evans (1898–1974) finished 13th with his Duesenberg-Cummins in 1931 ; It was remarkable that he had covered the entire route without a pit stop . In the same year, a Duesenberg-Cummins set the world record for diesel vehicles at 100.75 mph (162.14 km / h ) in Daytona Beach . In 1934 Stubby Stubblefield qualifiedin a Duesenberg racing car with the second worst time just for Indianapolis. His car had a six- cylinder Cummins diesel two-stroke engine . It lasted the entire 500 miles and finished 12th. Cummins diesels were occasionally installed in Indy racing cars until 1952.

In 1930 Clessie Cummins drove from Indianapolis to New York in a car converted to Cummins Diesel. For this 792 miles (1274 km) distance, he used up fuel for just $ 1.38 . In 1935, he exhibited an Auburn passenger car with a Cummins diesel engine at the New York City Motor Show. The vehicle did not go into series production.

Cummins had an important customer in Germany between 1963 and 1968: Krupp was looking for a replacement for its traditional, but hardly competitive two-stroke diesel engines for the drive of its trucks in the early 1960s and found it at Cummins. From 1963 until the end of truck production in 1968, Krupp installed Cummins engines.

In 1980, Cummins and Case Corporation formed a joint venture called Consolidated Diesel Corporation to develop and manufacture diesel engines. In 2008 Case New Holland acquired their 50% stake in this joint venture.

In 1996, the European Engine Alliance (EEA) joint venture was founded with Iveco and New Holland, in which each of the companies had a 1/3 stake. Cummins sold his share in this joint venture in 2008 to Fiat Powertrain Technologies.

Cummins is working on a 4.2-liter V6 and a 5.6-liter V8, which are to be installed in Dodge Ram pickups of the 2010 series.  This new engine family has an aluminum cylinder head with four valves, turbocharging and piezoelectric injection. The V6 is specified with 190 hp (142 kW) and 617 Nm.

The 5.9 l (B series) used in the Dodge Ram has proven to be very successful. High-performance diesel engines with a displacement of more than 15 liters are manufactured in Seymour (Indiana), Daventry ( England ) and Pune ( India ). 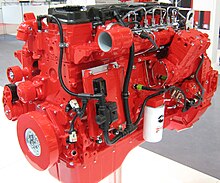